Voord Is The Word: The Voord Paradise

(An ongoing series set in a Divergent Universe...) 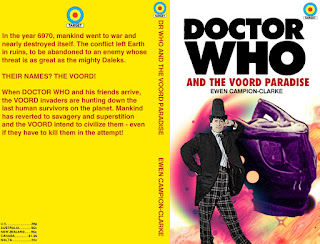 This adventure takes between The Herdsmen of Aquarius and The Imps


As they made their way back up the hill, Polly still felt sick to her stomach. She could still smell the dying man's hot, coppery blood as the shaman had ripped the crossbow bolt from his side. Polly still couldn't believe that these people - humanity in the far future - had become so backward they refused to believe in anything other than faith healing. Like the Doctor had said, even Neanderthals and cavemen had better medical treatment.

She knew Ben was just as upset, though he was much better at her at hiding it. As for the Doctor she couldn't tell if he was upset, angry, amused or even thinking about what had happened at all. All she could be sure of was that he wanted to find Jamie, with or without the help of the last of mankind.

"So, I guess we're going have to look for the Voords on our lonesome, then?" Ben guessed.

The Doctor peered through the treeline of the hill. "Well, we know that the villagers aren't going to help us. They'll probably spend the next few weeks in mourning."

"Well, they all knew the poor man," Polly argued. "In a small town like that, they were bound to be upset when he died."

"Not so upset they'd argue with that crazy witchdoctor though, are they, duchess?"

Suddenly there was a rumble from behind them. They turned and saw the early evening sky turned a dazzling purple by a firework flare that illuminated the whole village.

"Maybe they're letting off firecrackers for the funeral," suggested Ben. He didn't sound convinced.

"No," gasped the Doctor in a grave voice. "It's the Voord... they're attacking!"

He pointed with his recorder to the south of the valley, and Ben and Polly saw dozens of jet-black eel-like figures running into the village, firing their rifles. The villagers were mowed down even as they reached for their pitchforks and crossbows. As the attackers came closer, they could see the leader of the Voord was not wearing one of the distinctive helmets and his face was a mess of scar tissue and bare muscle - but even at this distance it was clear his expression was emotionless, business-like. He shouted simply to be heard over the din, and there was nothing but cold determination in his voice as he bellowed orders to his followers.

"Exterminate them! Kill them all! Burn the last of Darwin's children!"

As if on cue, a young girl of no more than seven ran out from a hut and approached the attackers. "Stops! Stops! Please!" she wailed, only for the Voord leader to aim his blaster at the little girl's unprotected head.

Polly was on the verge of screaming when the attacker lowered the rifle. Instead of killing the child, he effortlessly grabbed her by the scruff of her tunic and threw her into the arms of one of the Voord. "Still young enough to be harvested! Take it back to our lair!"

Even as the Voord slithered away with the struggling child, her mother ran through the confusion and flames at the edge of the village. She saw her daughter being taken away and ran to reclaim her, screaming in desperate hysteria.

She barely made three steps before the Voord leader blasted her down. He barely spared the dead mother a glance as he advanced into the village, smoke still rising from the barrel of his blaster. "We shall proceed!" he ordered.

Ben looked in horror at the burning village. "They're murdering every one of them!"

"There's nothing we can do for them, Ben," said the Doctor, voice thick with disgust.

The whole valley was now lit by the blazing village, and the sound of gunfire was drowned out by the screams of terror and agony from the helpless townsfolk. Polly felt the warm giddiness of unconscous approaching, on the verge of fainting. "So that's what happens to the last human beings on Earth?" she said, tears in her eyes.

"No," said the Doctor bleakly. "There's still Jamie. We've still got save him!"

They continued up the hill in silence.
Posted by Youth of Australia at 11:32 PM