Words fail me. Frequently. Suffice it to say rather than going for the wrist-slitting psychosis of Golden Brown with the finale, I found something a little more upbeat. When you look at it, Blake's 7 is as much a black comedy as a sci-fi drama.

In the meantime, an exchange from TV tropes that made me like Miracle Day more than I did than before I read it... it even sounds like a YOA exchange...


Nigel: The Blessing takes a different form to different people. The message to Jilly was that she's a gigantic cunt.

Andrew: I for one second this notion.

Dave: Of course, this means the whole cast are gigantic cunts as well since they also— you know what? I third this notion.
Posted by Youth of Australia at 8:33 PM 2 comments:

My Blinkered Vision: Doctor Who 2011

Combining my two greatest passions - Doctor Who and early childhood psychological trauma - I have combined to make this, a glimpse of Season Six with all the crap stuff ripped out of it and accompanied by a song about either burnt toast or heroin...

(NOTE: The Doctor's Wife isn't in there cause I ran out of space. Night Terrors isn't in there because it's crap.)
Posted by Youth of Australia at 2:00 PM 2 comments:

And, lo, the Emperor spake:

"As I understand it YOA no longer posts here because he now accepts that the Ben Chatham stories are excellent."

So. Let us restate some basic facts, shall we? 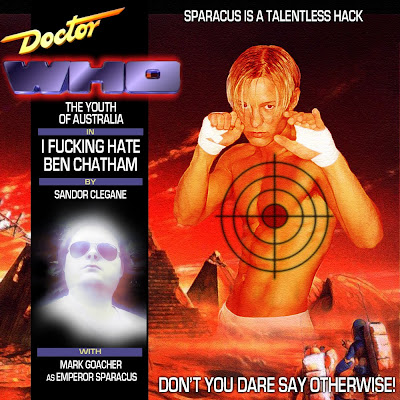 The reason I don't post there is because of the disgraceful behavior of posters in the OTC section, posters I had thought as friends. Plus I've got better things to do, what with being a diabetic charity worker with clinical depression and slashed wrists acting as MC for weddings.

Everyone clear on the situation now? Message recieved and understood, Monsieur Goacher?

Now, where was I?

YOA and the Diabetes of Type 2 (i)

[Nigel and Dave are sitting on the couch watching TV. Andrew sits on the floor, struggling to solve a Rubik's cube (in the sense it is a struggle to revolve the blocks) and consulting a book called "How to Solve a Rubik's Cube for the Educationally Sub-Normal".]

Nigel: So this is Waterloo Road, then, huh?

Nigel: I'll say. And Phil Ford wrote this one, did he?

Dave: That's what it says.

Nigel: This must have been during his rehab phase, between Torchwood and Sarah Jane... and as for that girl, you know, the underage nympho schoolgirl with the crush on the teacher...

Dave: I know! The teacher is like, vaguely flirty with her one during a lesson and before the day is out she's sexting him, infiltrating his house, then snuggling into bed with him when he's drunk off his head after a marital dispute! She's gone from "He's a bit cute" to full on psycho-stalker in LESS THAN SIX HOURS! Beyond imagination!

Nigel: I meant, her chat up line was totally unrealistic.

Nigel: You know, when she's in her tank top shoving her cleavage in his drunk face and what does she say? "I'm getting a boob job for my next birthday." How is THAT supposed to be a turn on? It's just a reminder that a) she's jailbait and b) she's underdeveloped jailbait.

Dave: Underdeveloped?! We are talking about the same girl?

Nigel: Look at her! If her mammary glands were any less pronounced you could use her cleavage as a fluid level to measure for woodwork!

Dave: They look pretty developed to me...

Nigel: And that sentence, Dave, says so much about you. Look at her, Dave! She doesn't have breasts, she has just painted a shadow down the middle of her chest to give the ILLUSION of beautifully, pillowy cleavage you could go skiing in...

Dave: How do you even know this?

[He rises to collect the mail, glad of the distraction.]

Nigel: Come on, Dave! You think there's no middle ground between filling their bras with toilet paper and silicon implants? You are a child, an immature and naive child!

Dave: Mark Gatiss is a visionary and the best writer ever!

Nigel: [disgusted] ...I would rather die than say those words - in ANY order!

Dave: So I win then?

Nigel: Yes, you win! Petty little bitty child, that's you are, David. Yes, why can't you be more mature, like Andrew?

[Andrew storms in angrily, waving a mass of print outs.]

Andrew: WHAT THE HELL IS THIS?! HOW FUCKING DARE THEY?!?

Nigel: You're doing this deliberately, aren't you?

Andrew: Symbion pathology! Simpleton pathology more like! Look at this!

[He tears the prints outs apart and throws them at Dave and Nigel. Strings of numbers and letters, totally meaningless.]

Nigel: I feel richer for looking at this. I really do.

Dave: Your blood tests? Is that what this is?

Andrew: These... MORONS... seem to think my blood sugar and glucose levels are thoroughly unacceptable!

[Nigel turns his page 180 degrees, still trying to make sense of it.]

Nigel: Yes, that is what they seem to be saying. Apparently.

Dave: Is this that blood test you had after we all drank a bucket of V mixed with Redbull? What are you worried about then? It's just a one-off, you're probably fine now.

Andrew: [calming down] Yes. You're right, Dave. Of course. Understandable error. And I can prove it!

Nigel: You proving it wouldn't involve you leaving the room and letting us watch this demented soap opera in peace would it?

[Andrew starts sorting through the junk in his silo.]

Nigel: Seriously, the sucidial psycho blonde chick with MS is taking passive aggression to a kind of chronic fatigue agression - she's even being mates with her ex-lover and ex-best-friend so they can feel REALLY low when she overdoses on all those laxatives.

Dave: Are they laxatives?

Nigel: They better be, considering how full of shit that lady is. To think, she was once that sweet little girl Tom Baker took under her wing in that CS Lewis adaptation. Or that psychotic mermaid in Torchwood. Actually, there might be some kind of link developing there...

[Andrew brandishes a wierd device that looks like a cross between a remote control and mobile phone and a little capsule full of plastic strips.]

Nigel: Couldn't be more pleased for you. Well, I could, but it would be at your funeral.

Andrew: It measures your blood sugar level. Like so.

[He jabs Nigel in the shoulder with a sewing needle. Nigel screams in pain. Andrew plugs a strip into the device, then dips the end of the strip into the blood from Nigel's injury. It beeps loudly and Andrew frowns.]

[Andrew jabs his other shoulder and tries again with a new strip.]

Dave: You just HAPPEN to have one of those around?

Andrew: It's not my fault your blood isn't filling the sample strip is it?

Nigel: YES IT DAMN WELL IS!

[This time the device beeps.]

[Dave sighs and rolls up his sleeve. Andrew samples his blood in one go while Nigel clutches tissues to his bleeding forehead and sobs.]

[Andrew tries his own.]

Andrew: Well, apparently your average healthy non-diabetic has a level of around 5 or under.

Nigel: [whimpers] Hah! I laugh at your misery... through tears of pain...

Dave: But you drank all the energy drinks weeks ago. They must be out of your system!

[Andrew slumps, depressed on the couch.]

Dave: What do we do now?

Nigel: We staunch the blood, that's what we do! Then I put a restraining order on this yowie hermit with the accupuncture fetish! You bastard!

Andrew: All the girls love a scar, Nigel.

Nigel: Then you're going to be the most attractive pin-up on Earth when I'm done with you! See what I did there? Pin? Huh? Oh yeah. I still got it.

[The credits are showing on the TV.]

Nigel: Aw, we missed the end. What happened again?

Dave: Not sure. I think MS lady's cunning use of the "fetus crunch stomp" wrestling manouver might have ended that particular pregnancy storyline.

Nigel: I bet the bitch is as sanctimonious as ever after this - always taking the high ground. [shouts at TV] Hey, Lorna, how many babies have THEY murdered today?

Andrew: You stopped bleeding yet?

Nigel: I can think of many punchlines to that, mostly involving members of the clergy and underage schoolgirls so be glad I'm not going there after the amount of vomit Dave released last time. I want you all aware of how sensitive I'm being. And for the record, yes. Seem to.

Andrew: Good. You're driving me to 100 Carillion Avenue.

Nigel: What? When Grandpa in my Pocket is on in less than nine hours time?!

Nigel: That was pathetic, I admit. Let's go.

- to be continued
Posted by Youth of Australia at 11:48 AM No comments: