It just struck me:

We're missing 22 Dalek episodes but only 9 Cybermen episodes - and 3 of those are now animated (with another 2 on the way). Ergo, Cybermen WIN!!! BOOYAH, KALEDS! BOOYAH!

If only the public had agreed... 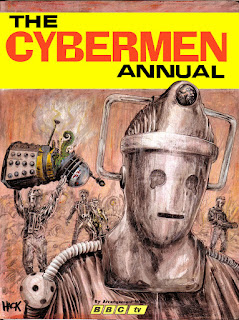 And once again, fortune vomits on my Phantom-theme eiderdown. In the space of a week I lose my job, and then get shang-haied into being a door-to-door-charity-collector with about as much notice as it takes you to read that sentence!

But, think I, there is a lighter side. A volcanic eruption of rumors bursts out - some cunning bastard found a casche of BBC material in Africa, three tonnes of film including Z Cars, Morcombe and Wise, Hereward the Wake, Out of the Unknown and... 90 missing episodes of Doctor Who.

To put that in perspective, the only Doctor Who stories still incomplete would be The Dalek Masterplan and The Wheel in Space. EVERYTHING ELSE WOULD BE BACK.

Now, of course, any sane individual would go "um, isn't this a bit too good to be true?" and yes, many including myself did. But, hell, it's not like that scenario is impossible. Unlikely, yes, but finding Tomb of the Cybermen under a Hong Kong supermarket is also unlikey and that happened, dammit. And what kind of loonbag would lie about that? If I wanted to hoax someone, I'd say something a tad more reasonable - claim to have an episode or two of Fury from the Deep. As soon I'd say "I've got the whole story", people would be very suspicious. Saying "I have all bar fourteen episodes of missing Doctor Who" is, in the words of that noted intellectual playright Dario Fo, fucking deranged.

Now, Ian Levine - possibly one of the worst human beings not in either Australian media or a well-known war criminal - debunked the idea, then said he'd been given cast iron proof that it was true. At worst, AT WORST, we might not have got 90 missing episodes but 80 plus some we already had. And not only is Ian Levine of all people admitting he's wrong, but there was evidence that Moffat and pals were keeping this quiet so as to provide a big reveal for the 50th Anniversary.

(And Moff's promise that DW will dominate television this year is slightly less convincing than Kevin Rudd's political hands-off stance. Indeed, it hasn't had ANY publicity for the last month, which is poor by any standards, let alone the anniversary year. A shitload of missing eps to be unleashed at a key moment is, we must all agree, EXACTLY the kind of whacked out madness Moff would unleash.)

Alas, the proof of it all - a crate of three tonnes of stuff out of Africa - has been officially denied to be anything, with some bloke making it absolutely clear every last episode of Doctor Who sent to the subcontinent was sent back with the specific intention of being utterly destroyed and we're all no-fist wussy little spineless dogs for believing otherwise.

Now, I know we're technically no worse off than we are last week - with every missing episode being kept on audio if not telesnap form, meaning there is not a single story that cannot be at least listened to - but come on! We were actually told, right or wrong, that we were getting everything back! No one has ever promised that before! This isn't "oh, gosh, we're not going to see another Enemy of the World", this is "you know every episode you ever wanted to see? WELL, FUCK YOU!!"

(In the interests of absolute journalistic integrity, there are still rumors that someone's found Marco Polo, Enemy of the World and Web of Fear in their entirety which is nice, yes, but maybe I wanted to see the Mythmakers, the Highlanders and Maggie Harris walking into the fucking sea!)

However, I am still of the opinion that an animated episode is better than none at all - and quite possibly better. The Invasion is right at the bottom of eps I want found, because we've got the next best thing. And now, some kind folk are doing the same to The Moonbase, The Ice Warriors and, oh yes, The Tenth Planet...

Posted by Youth of Australia at 9:07 PM 4 comments:

Since my ongoing employment has abruptly been terminated, I stave off oblivion for another day by giving a vision of DW's future if the Campion-Clarke residence had any say. 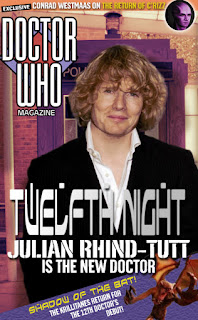 Back to square one.
Posted by Youth of Australia at 9:54 PM 4 comments:


I'd normally do some jokes about the high concentration of Gatiss scripts had broken his resolve, but no, they're pretty decent this year.


Oh, I suppose I should have seen the signs. All that bollocks about the Fall of Eleventh, hacking off River Song like a diseased limb, the old standby of doing lots of flashbacks and multiple Doctor stories to remind us all that the latest Doctor is just that - the latest. And then Smithy goes and gets his head shaved, just to rub it in. But, and this is where you piss me off, you promised you'd be back next year! PROPERLY PROMISED! PRESS STATEMENTS AND EVERYTHING!


...and the next person to use the quot "rule 1 the Doctor lies" will win its lucky poster an all-expenses paid trip to an intensive care unit...

You realize this means my brilliant predictions are... 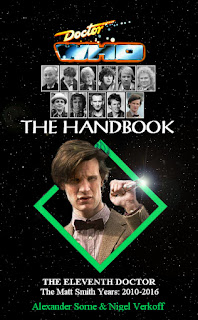 ...yes, THREE YEARS OUT! THREE!!! It was too much to expect the bastard to match Tom Baker, even with these half-year seasons! YOU QUITTER SMITHY! NO FIST! YOU MAKE ME SICK! EARLY RETIREMENT IS NOT - FUCKING - COOL!

You realize the shit we're now going to be stuck with from nutters like Mad Larry, sparacus, Kyron Mallet, er... no, I think all the others are dead now, actually... but still! Those surviving brain donors of Eye of Horseshit want Billie Piper's boyfriend to be the Twelfth Doctor, and THEY DON'T EVEN LIKE BILLIE!

There should not be a black Doctor, just as there shouldn't be a female Doctor. The Doctor is a white English male and anything else would change the character and the ethos of the show too much. The character of the Doctor has always embodied a sense of eccentric Englishness. He has always been played by a white, male actor. Casting a black, asian or oriental actor would be rather akin to casting a black actor to play Henry VIII. Casting a woman would be even worse.
A woman? Absolutely not. Under no circumstances. No.
As I've said before, I think that Trevor Eve would make an excellent Doctor as he proved with 'Shoestring' that he can play an eccentric hero. If they want a younger actor then Ben Whishaw would be fine. Sir Ian McKellen would be superb as an older Doctor.
Trevor would turn the show around from this populist, 'race to the bottom' direction its been on since 2005 and give it real gravitas and serious intent. Doctor Who could be a great show that deals with serious historical and science-based issues within an entertaining framework. Trevor Eve is best remembered for his role as Eddie Shoestring, a character that was almost a rehearsal for the part of the Doctor. Eddie Shoestring & the Doctor have a lot in common : eccentricity, a passionate sense of justice and a very individual approach to life. I suggest that, together with Trevor's Doctor, a new showrunner be appointed.
True, Trevor has repeatedly stated in interviews how much he despises Doctor WHo, but he was making the valid point that populist shows such as Top Gear and the post 2005 Doctor Who get more resources and money thrown at them than quality or edgy drama shows. This is a completely valid point and he was not attacking Doctor Who itself, just its current direction. With Trevor Eve as the Doctor and a new showrunner we could see a real great era of Doctor Who.


- the Emperor, approximately 0.59 seconds after the news broke.
He has these things kept on standby, you know...

The same week that DW & Race has come out condemning the Peter Davison era as a war crime because the very concept of "cricket" is thunderingly racist, we're going to have more people demanding ethnic minorities play the Doctor rather say BECAUSE THEY CAN ACT!

WHAT THE HELL IS GOING ON?!? THE LAST THING I REMEMBER WAS SEEING THAT GODAWFUL LIGHT SHOW AT CIRCULAR QUAY! GAAAAAAAAAAAAHHHHH!!!!

Posted by Youth of Australia at 4:36 PM 9 comments: