Voord Is The Word: The Fate of the Voord

(An ongoing series set in a Divergent Universe...) 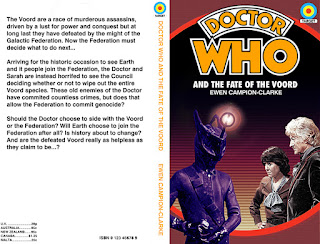 This adventure takes between Multiface and The Sea of Fear


"The accused have been found guilty on all charges," declared Lord Savran, the scroll held between his clamp-like hands. "The totality of the crimes they have committed amount to the highest treason: crimes that endanger the very infrastructure of the Galactic Federation. In sentencing the accused species, their observed moral codes, history of interracial cooperation and loyalty to the Federation ideals of tolerance and quality have been taken into account but none have mitigated in their favor. All records of the Voord bloodline confirm that they prioritize their own conquest and advancement over the safety and rites of Federation citizens. There is no doubt at all that the Voord leaders are fully aware of their actions, the non-validity of said actions, and the likely consequences..."

Alphek stared up at the Martian delegate, inscrutable under the strange facemask. It did not display any sign of being concerned at what was happening, or even that it was paying attention as the sentence of the entire Voord species was passed.

"This court cannot find any reason to exonerate the accused in any way of the crimes they have committed against the Galactic Federation," concluded Savran. "The sentence is therefore that the entire Voord bloodline suffer extinction beyond all possibility of molecular preservation. The neural relay connecting the Voord Alphek to the rest of Voord kind will be overloaded with psychotropic energy until saturation and finally disintegration occur. Within the hour, every Voord in the universe will be dead."

The distinctive chimes of the court procedings rang out through the Judgment Chamber, and the Draconian guards lead the unresisting Alphek onto the illuminated podium. The huge transparent tube descended slowly from above, covering Alphek's helmet, then shoulders, torso, legs and finally sealed shut.

The Doctor and Sarah ran through the archway onto the observation gallery overhead.

"He's not doing anything!" Sarah exclaimed in surprise. "He's just going to let them do it!"

The Doctor watched as the Alpha Centauri delegate shuffled over to the control panel, reaching out several tentacles to grasp the final alignment switches. "There's something more to this. Alphek's not the sort to perish without a fight, even if the Federation had agreed to spare his race..."

"But there are no Voord on the station, no ships nearby, there's no one else here on Alphek's side except Alphek himself!" Sarah protested, trying to understand. "And he's just letting it happen!"

Alpha Centuari threw the final switch, and the glass tube around the Voord leader filled with a white, boiling light. The Voord trembled on the spot, twitching and shaking as the antennae on its mask-snout started to blaze in sympathy. Cracks began to form in the horned helmet, the metallic surface starting to peel and degenerate. The antennae was now a white-hot ring of light and Alphek twisted convulsively.

"Something is wrong!" squeaked Alpha Centauri. "The energy overload is not being transmitted!"

"It means the power isn't passing through Alphek into every other Voord - it's all being focussed on Alphek and Alphek alone. But he can't possibly withstand that bombardment!"

"I'm not sure about that," Sarah muttered.

Alphek's helmet was an unrecognizable horror of peeling, twisted metal. The antennae had melted and fused into the mess atop the Voord's neck, glowing with incandescent heat. Alphek's voice echoed around the chamber, far richer and stronger than ever before.

At last! I have won! The long fight is over and we Voord are the victor! Your torrent of death is not sweeping away but instead is filling my mind full to bursting with more strength than ever before!

"That's what he wanted all the time!" the Doctor gasped. "He's not dying, he's transforming... evolving!"

I shall be the leader of you all, the monarch that all shall obey! Nothing can stand in my way now! The Federation is mine! No planet in and galaxy, no cosmos in the universe can resist me. All life shall bow down, all thought will worship!

Sarah recoiled in horror. "It's all been a trap..."

The stars themselves will lie beneath my feet, and all the voices of creation shall cry my name in triumph! Alphek! Alphek! ALPHEEEEKKKKKK!!!!
Posted by Youth of Australia at 12:13 PM